From geekdad.com by Brad Moon

If you want to get the best possible experience out of listening to music on your smartphone, making the switch from Bluetooth wireless to wired headphones is a must. With most recent smartphones ditching a headphone jack, that means adding a dongle to the mix. However, to take things to the next level—including being able to take advantage of the high resolution tracks many streaming music services now offer—there’s another dongle to consider: the Questyle M12 Mobile Headphone Amplifier With DAC.

The Questyle M12 is the intermediary between your mobile device and your wired headphones.

This tiny device puts a headphone amplifier and a DAC (Digital-to-Analog Converter) in a form factor that looks like a thumb drive. It’s a nicely designed piece of gear, enclosed in an anodized aluminum case (available in black or silver finish) with a USB-C input on one end and a 3.5 mm audio jack on the other. That USB-C port is the data conduit from the mobile device, as well as providing the power to run the M12.

The M12 automatically detects the impedance of connected headphones and adjusts to high or low output levels accordingly. Questyle says the M12’s DAC has decoding capability up to PCM 384 kHz/32 bit and DSD256. Amplification introduces an ultra-low 0.0003% distortion. 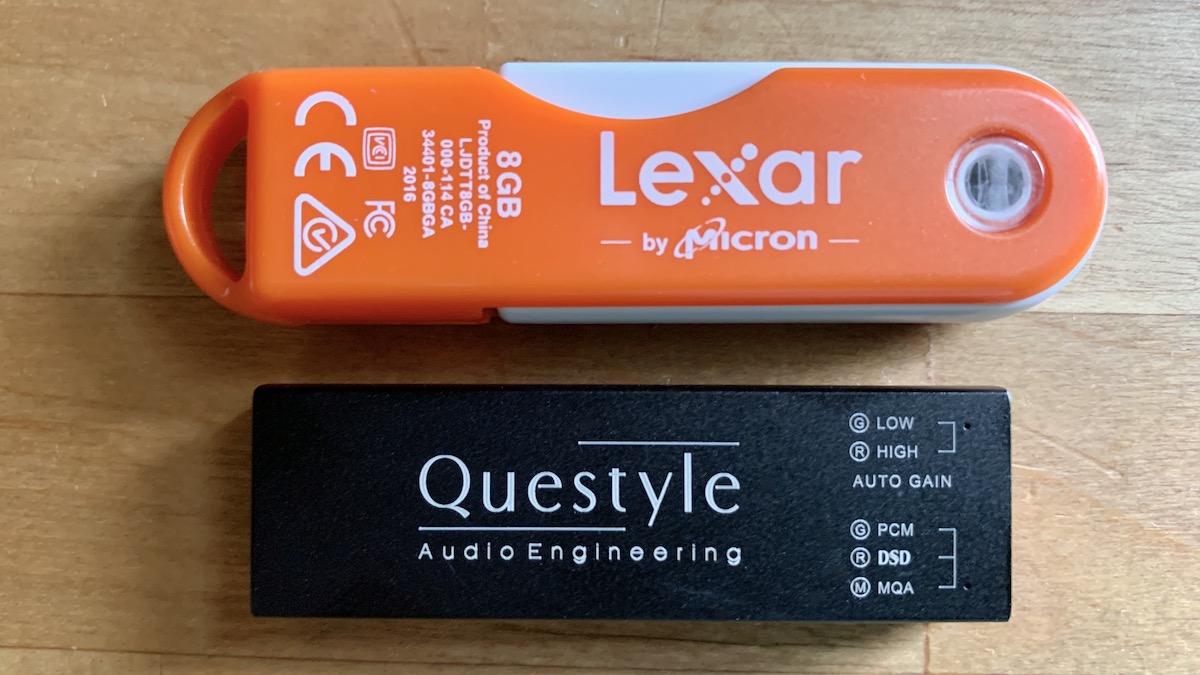 The M12 is tiny enough that it can easily become part of your headphone setup.

To see what the Questyle M12 can do, I tested with a set of Audeze LCD-1 headphones. Equipped with 90mm planar magnetic drivers, these headphones were impressive when I reviewed them last year—and that was plugged straight into an iPhone or laptop.

Questyle ships the M12 with two, short USB-C cables: one with a USB-C connector, the other with USB Type-A. I use an iPhone, so the company sent me a USB-C to Lightning cable, which is sold separately. I tried using the Lighting to USB-C cable Apple included with my latest iPad, and that did not work, so iOS users should plan on buying that cable. 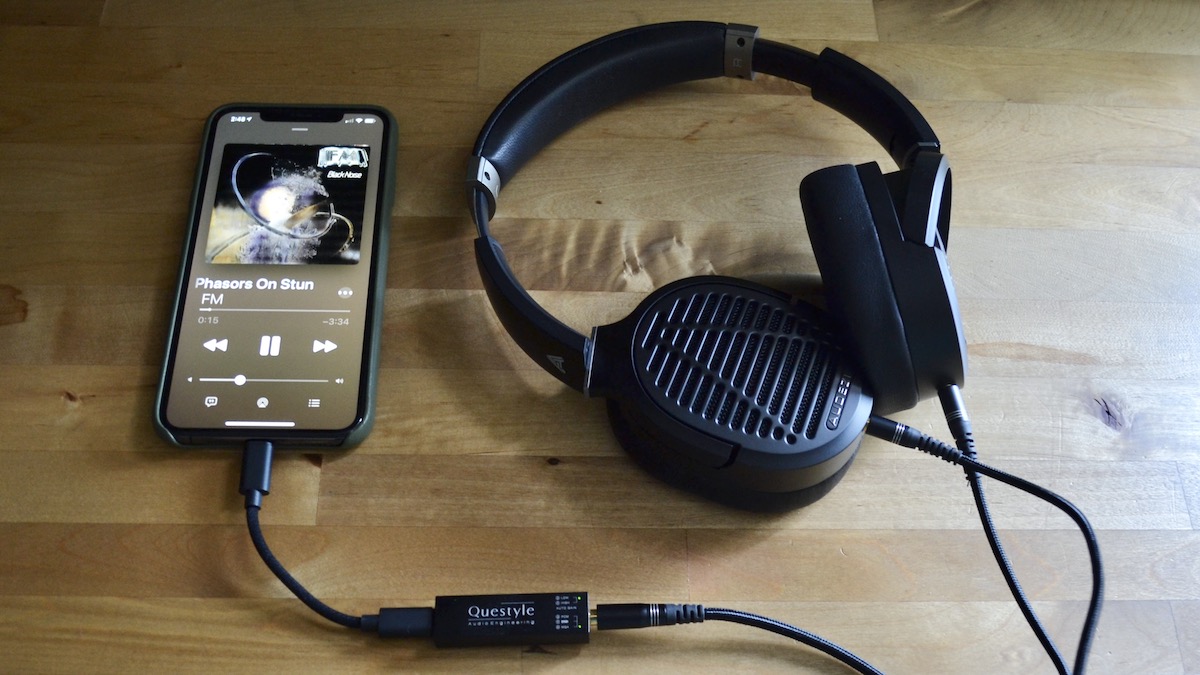 Bring on the Lossless Audio

Playing standard Apple Music tracks there honestly wasn’t a whole lot of difference that my ears could detect between plugging directly into the iPhone and using the M12. Music sounded cleaner at high volumes and the bass was a bit more defined, but I really couldn’t identify any overwhelming improvement. Part of that was the Audeze headphones that do an excellent job of making the basic Apple Music tracks sound very good.

However, things were very different when I switched to streaming using Apple Music’s optional High-Res Lossless format. These songs stream at a maximum resolution of 24-bit/192 kHz. And they contain a lot more data. Apple says an average three-minute track at the standard 256 kbps of Apple Music contains 6 MB of data. The same track streamed as in Hi-Res Lossless format uses 145 MB of data.

An iPhone isn’t capable of playing songs in Hi-Res Lossless quality through wired headphones. Apple says that doing so requires an external DAC.

The Questyle M12 is a mobile headphone amplifier equipped with a DAC. When listening to songs in Apple Music’s Hi-Res Lossless format using the M12, there is a dramatic improvement over listening to those tracks as 256 kbps AAC directly through the iPhone. Everything was noticeably more detailed, with improved separation and bass that made the most of the LCD-1’s planar drivers. Clearly, all that extra data matters—so long as you’re plugged into a DAC that can take advantage of it. 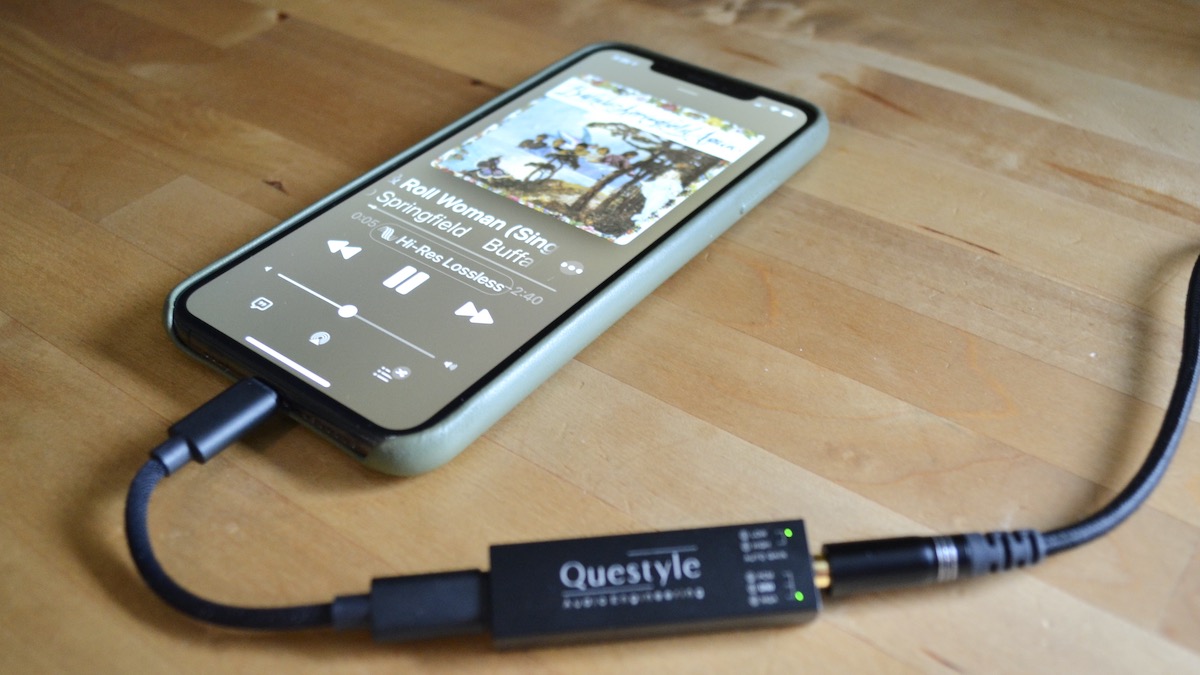 Is a headphone amplifier and DAC—even a super-compact one like the M12—something that most people would get use out of? Probably not. Especially when you consider the fact that they’re more than likely listening to their music wirelessly, with Bluetooth headphones.

However, for music fans who insist on wired headphones to get the best possible listening experience, the Questyle M12 mobile amp with DAC is a great way to maximize the performance of your favorite headphones while plugged into a smartphone or other device. At $139.99 it offers a relatively affordable and incredibly compact audio upgrade.

Leave a comment
Head-fi Review: Questyle M12 King of $150 price bracketBack to M12Head-fi Review: M12 has now jumped over to 5 Star performers in my book